Residents of the Daimonic Reality 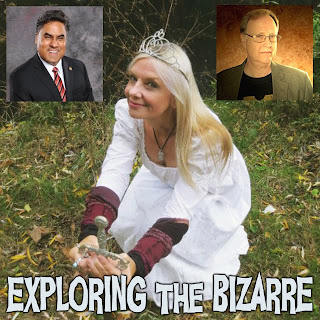 Rather than G-Man, they called him "X-Man" in the FBI.  John DeSouza  spent more than 25 years in the FBI as a Special Agent who maintained a Top Secret security clearance and worked counter-terrorism and violent crime cases.   DeSouza, along with guest host Susan Demeter-St. Clair,  says that there is more to our reality than we can perceive with our normal senses. Since the beginning of history, people have theorized that there are other worlds that co-exist alongside of our own. Paranormal and spiritual experiences are used as examples of these extradimensional realities, yet, empirical evidence has been difficult to obtain.
Because we are all residents of a multi-dimensional universe, but are conscious of ourselves only in a three-dimensional world, our normal level of consciousness (which includes science, which is born of this consciousness) is inadequate to think beyond three dimensions. Even though modern science has not caught up to the theories of extradimensional consciousness, that has not stopped manifestations that seem to originate from beyond our reality. These mysterious events seem to interact with us using ways that are often incomprehensible or absurd by nature. Possibly this is because they operate on properties of space-time, or on a multi-dimensional reality in which our space-time is a subset.
This episode on Exploring the Bizarre, John DeSouza and guest-host Susan Demeter-St. Clair will discuss consciousness, extra-dimensionality and the "other" that manifests itself into this reality.
Posted by Unknown at 4:37 PM