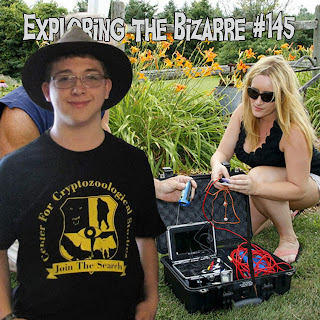 Guests KATE ELIZABETH and COLIN SCHNEIDER believe in the strange and unknown world of cryptozoology and "Exploring the Bizarre"(KCORradio) hosts TIM BECKLEY and TIM SWARTZ are digging this evening's far out adventures. Kate continues to spend her days and some nights on Lake Champlain looking for the lake monster the sightings of which are historical. She has takes some fascinating -- unexplainable -- videos of the creature(s) to be found on YouTube and her tall (or long) tails are backed by hard to dispute evidence. Colin has the distinction of being the youngest criminologist, but even though he may be a newbie his research into Bigfoot and other forgotten beasties is very polished and professional. In fact, turns out, he is a bit of a skeptic. Free newsletter at www.ConspiracyJournal.com
Posted by Unknown at 3:00 AM No comments: 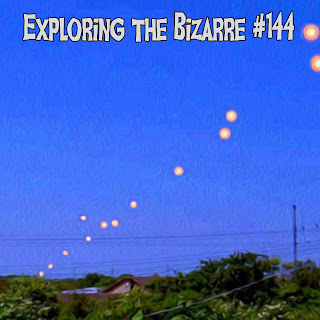 This week on "Exploring the Bizarre" guests RALPH & MARSHA RING  and WILBUR ALLEN discuss how UFO science has advanced (sometimes behind the scenes) to the point where not only do we have an understanding how these mysterious objects operate, but we may now be capable of building our own versions that use antigravity and possibly even teleportation and time travel. Join hosts TIM BECKLEY and TIM SWARTZ as they push the boundaries of science to travel to infinity and beyond. Ralph is a natural scientists and creative technician who worked together with Otis t. Carr (a prodigy of Tesla) and a team of dedicated scientists on alternative technologies. Engineer/inventor Wilbur Allen had a face to face encounter with ETs at age five. He is a former White House/Air Force One engineer for ABC News, and a contract photographer at National Geographic. He has photographed many strange objects from Washington DC to Sedona that may be working wormholes that could lead into another universe or dimension. Free newsletter at www.ConspiracyJournal.com
Posted by Unknown at 3:59 PM No comments:

Wrestling and the World of the Paranormal -- Tribute to Vivian St. John 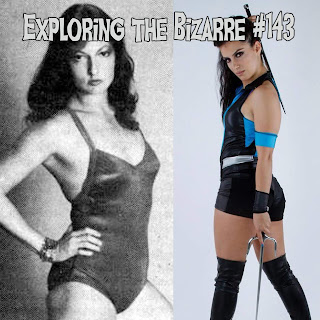 Tim B. gets the smack down from pro grapplers TATEVIK HUNANYAN and DONNIE BROOKE in this very special wrestling/paranormal tribute to the late Vivian St John, one of the most remarkable wrestlers -- and psychics -- of her era. Vivian outside of the ring was Suzanne Miller who worked with Beckley as a psychic at the NY School of Occult Arts and Sciences and was one of the authors of "Curses and Their Reverses." I guess you could say she lived in a parallel universe. To salute her Tim B and Tim Swartz have tag teamed up with Tatevik who was a close friend of Viv and has some psychic tendencies of her own (they often discussed the topic) and Donnie who is an independent wrestler out of Augusta, Georgia who just happened to be the local "go to see" UFOlogist when there is something strange being observed in the sky (or on the ground for that matter). Vivian worked with Talismanic Magic and symbols and was fascinated with the Ouija Board. At 6 foot 1 plus with her high wrestling boots on iSue stood out, especially when she traveled with Beckley to magickal spots to check out the world of the weird. She appeared twice as the cover model on "Beyond Reality" magazine. So next time you watch a match you'll know that Pro Wrestling and the paranormal have a lot in common. Not only have many wrestlers used the supernatural as part of their persona (Gangrel, Papa Shango and Kane and The Undertaker), but they have had strange experiences to (pardon the expression) boot. Free newsletter www.ConspiracyJournal.com
Posted by Unknown at 3:00 AM No comments: 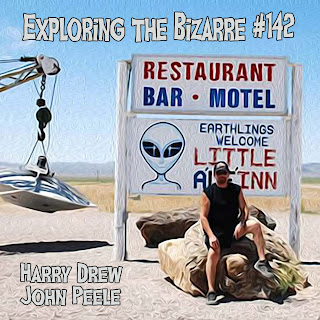 At last! A UFO artifact we can believe in! JOHN PEELE a Florida resident could have discovered the Holy Grail of UFOlogy. Proof at last! Thank God proof at last! And listen as special guest HARRY DREW fills "Exploring the Bizarre" hosts Tim Beckley and Tim Swartz in on the events surrounding the UFO "crash" incidents in the desert outside of Kingman, AZ. Several incidents! Not just one! And involving humanoid aliens, a forest fire and a "rescue" like no other with a strange "ambulance." This is all eerie and if you heard the original broadcast over KCORradio.com (live every Thursday at 10 PM Eastern/7 Pacific) you will want to play it again. If you watch here on our YouTube channel (please subscribe) you are in for a real treat. It took Tim B. nearly 40 years to find John Peele . . . it was such an important find that he had to keep looking. Free newsletter http://ConspiracyJournal.com
Posted by Unknown at 10:45 AM No comments: