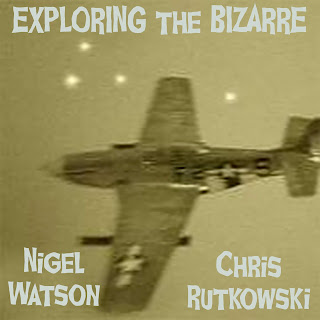 Special Guests Canadian CHRIS RUTKOWSKI and Britisher NIGEL WATSON come to Exploring the Bizarre (KCORradio.com) packed with great tales of UFO intrigue and alien hostilities. Hosts TIM BECKLEY and TIM SWARTZ listen awestruck as the cases unfold -- informed of the fact that not all UFOs are piloted by sweet, kind-hearted spacemen. But that they may be responsible for attacks on homes, disruption of power sources (we had one right on the air, no kidding!), radiation sickness, paralysis and attempts to bring down our planes. Chris is the primary investigator of the Falcoln Lake UFO Incident which transpired 50 years ago (the Canadian govt. has even issued a $20 commemorative coin in honor of the encounter, and a annual UFO festival is held near the landing spot) in which a witness was badly burned. Its a good physical trace case to be sure that was even dramatized on TV's popular " "Unsolved Mysteries." Get he scoop with photos by getting Chris's book. Link leads to our blog with lots of photos and information on this sensational case. An historical one! https://spectralvision.wordpress.com/2018/05/ And speaking of historic cases Nigel takes us back to WWI and the first sightings of foo fighters, strange objects with powerful torch lights and what even could be some humanoid encounters. Nigel writes for the "Fortean Times" and is author of numerous sensational books posted on Amazon. He contributed to our own work recently published "UFO Hostilities and the Alien Evil Agenda." Both these fabulous researchers know their stuff -- Hey other podcasters why don't you put on some different guests for a change? These guys are super! Free catalog at www.ConspiracyJournal.com

Posted by Unknown at 9:43 PM No comments: 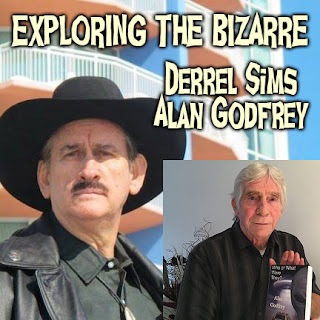 Guests ALAN GODFREY and ex-CIA DERREL SIMS provide startling revelations on the TRUE nature of the UFO "invasion." in our sky -- and on the ground. "Exploring the Bizarre" (KCORradio.com) hosts TIM BECKLEY and TIM SWARTZ listen to some of the wildest and scariest tales of abductions by various Ultra-terrestrial races as well as the possible murder of a British citizen. Godfrey is an retired British police offer who found the body of a slain man -- Zigmund Adamski -- atop a coal pile with burn marks to the crown of the head and a large burn mark at the nape of the neck. Adamski had been missing for six days. In addition to this strange occurrence, though officer Godfrey had no prior interest, six months later he had his own encounter at 5 AM along a deserted road. Sims admits to being a retired member of the "agency" He reveals that he first encountered the evil grays at an early age and has collected implants from others who claim to have been abducted. What do the aliens want? What will they likely do to you if they "pick you up?" Free newsletter at Conspiracy Journal.com - mrufo8@hotmail.com
Posted by Unknown at 3:00 AM No comments: 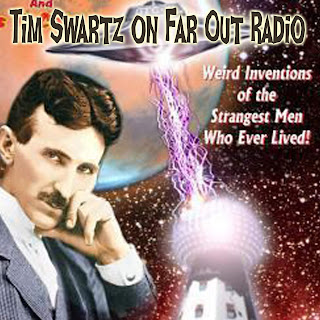 http://soundcloud.com/mr-ufos-secret-files/tim-swartz-tesla-interview
Here are the weirdest -- but most important -- inventions created by two of the greatest minds of our time. History Channel consultant TIM SWARTZ is the author of "The Lost Journals of Nikola Tesla," "The Miracle of Nikola Tesla's Purple Energy Plates" and "Men of Mystery." These are inspired revelations never aired before. HERE IS THEIR STORIES... THE UNTOLD STORIES OF INVENTOR AND WIZARD NIKOLA TESLA AND FREE ENERGY FLYING SAUCER BUILDER OTIS T. CARR Here are plans for a "Telephone" to call other planets. . .An apparatus that can read the human aura. . .a disc-shaped craft that can take us to the moon in under an hour. NIKOLA TESLA - Though chosen to share the 1912 Nobel Prize in Physics with Edison, Tesla refused the award and during his life tore up royalty contracts which would have earned him millions of dollars. Not much is known about this "strange" loner as Tesla spent most of his life in total seclusion. However, those who did know him even slightly say he was not a normal human, but a real SUPERMAN, either a reincarnated master -- or a spaceman with superior mental powers placed here to assist in earth's technological development. OTIS T. CARR - A student of Tesla's, the Baltimore-based engineer believed that every person should have the opportunity to travel to other planets which he believed to be inhabited by human-looking space people as physical as you and I. Based on conversations with his mentor, Carr constructed a flying saucer-shaped device that he believed would take us to the moon and beyond. He received much ridicule and harassment that eventually landed him in jail under bogus charges of fraud -- the government claiming that it is impossible to create an operational free energy device. History has made Tesla out to be merely a scientist and an engineer when he was really MUCH MORE. There is an entirely different part of his live story -- and it is an UNEARTHLY ONE! Free newsletter ConspiracyJournal.com -- mrufo8@hotmail.com 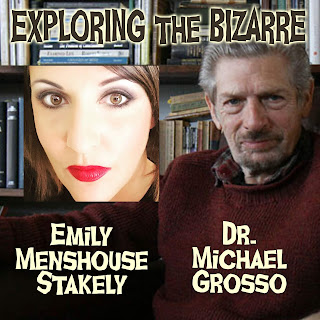 Join Exploring the Bizarre hosts Tim and Tim for a consciousness raising experience! Guests MICHAEL GROSSO and EMILY MENSHOUSE STAKELY tell us all about their paranormal experiences -- and they are juicy ones. Michael Grosso, Ph.D, is a scholar, teacher, author and painter whose interests span psychical research, mystical art, the parapsychology of religion and philosophy. He tells us about a miracle experience where UFOs seemed to play a cat and mouse game with him outside his window in Greenwich Village which lead to a leap in awareness.He has recently written "The Man Who Could Flyi." Emily says that after growing up in a haunted house and God allowing her to have the gift of discernment of spirits, she became interested in the paranorma and has been an investigator for over 15 years. She got her start with the Kentucky Paranormal Investigators and from there she was recruited to be on the TV show "The Paranormal Journeys. Emily has a YouTube channel "The Dirty Ghost Box"which features EVP's of the not so gentile kind. Yes! Spirits do curse! Sign up for free newsletter at www.ConspiracyJournal.com
Posted by Unknown at 3:00 AM No comments: 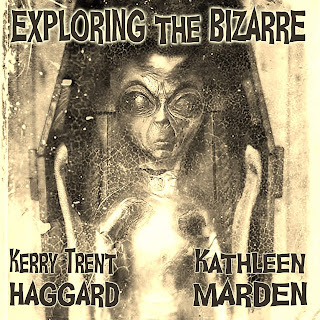 "Exploring the Bizarre" (KCORradio.com) hosts Tim Beckley and Tim Swartz welcome KATHLEEN MARDEN and TRENT HAGGARD to discuss early UFO crashes to the most modern UFO abductions. Trent has researched the oldest known UFO crash in Aurora, TX when an unknown airship hit a windmill on the property of Judge J.S. Proctor causing the death of the sole alien occupant. Kathleen is the niece of the world's most famous UFO abductee Betty Hill and is currently associated with the Edgar Mitchell Foundation for Research into ET Encounters. Free newsletter and updates www.ConspiracyJournal.com -- mrufo8@hotmail.com
Posted by Unknown at 12:54 PM No comments: