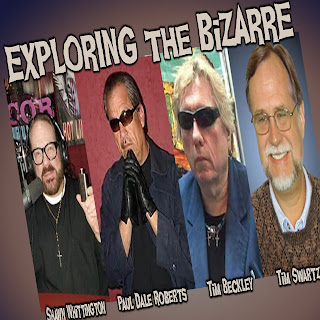 BEWARE. . .FOR HERE THERE BE SPIRITS! –- This week on Exploring the Bizarre (KCORradio.com) hosts Tim Beckley an Tim Swartz engage SHAWN WHITTINGTON and PAUL DALE ROBERTS in a haunting conversation. Both guests have had extensive experiences and face to face encounters with things that dwell within the dark boundaries that often witness madness. Whittington is a devout Catholic and an ordained Spiritual Warfare minister, so he tends to see Satan behind almost every paranormal experience. While Roberts has photographed UFOs on several occasions (once near Mt Shasta) and has tangled face to face with those mysterious orbs. God Vs. Evil in the paranormal? You be the judge. Free newsletter from mrufo8@hotmail.com
Posted by Unknown at 5:04 AM No comments:

All That Glitters - The Glam Rock Saga of Tim Beckley 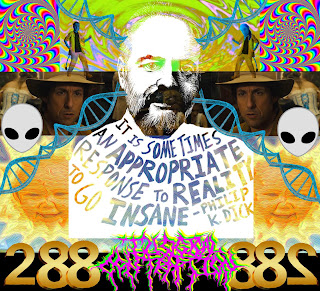 The crew of ILLOGICAL CONTRAPTION get their legendary guest to open up and come clean on a variety of topics. Most know TIM BECKLEY  as "Mr UFO" or his horror movie persona of "Mr Creepo." But he has had many other adventures in his extensive career. Back at the height of the NY glam rock scene he was identifiable as the champion promoter  glitter rock, promoting bands and in general hanging out with groups like Teenage Lust, the Magic Tramps, the Harlots of 42nd Street, Satan the Eternal Fireman, Blue Ocean, and the NY Dolls. Many times he was in the same rehearsal studio as Kiss, Talent Recon on Times Square.  He was even on Edgar Winter's Frankenstein album (there is a funny story here) and he was "cool" enough to have David Bowie mention him in his biography. Beckley remains in touch with remembers of these illustrious groups and plans to write a book on the glam rock scene and welcomes photos and interviews from this era at mrufo8@hotmail.com Beckley also discusses his dozen and one synchronicities, as well as living in a computer simulation. Read "The Matrix Control System of Philip K Dick and the Paranormal Synchronicities of Timothy Green Beckley").
Posted by Unknown at 6:30 PM No comments: 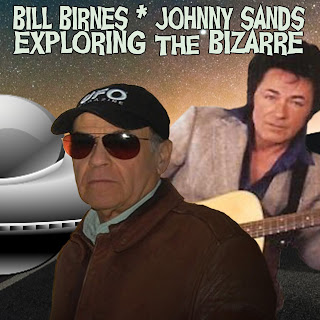 Exploring the Bizarre hosts (KCORradio.com) Tim Beckley and Tim Swartz pick up their air guitars and welcome country singer and stuntman JOHNNY SANDS along with UFO Hunter and eclectic author BILL BIRNES (i.e. - "Edison vs. Tesla: The Battle Over Their Last Invention). Bill and Tim B met Johnny on episode 34 of UFO Hunters ("The Silencers")  and became instant friends. Sands tells about his career with Elvis, Peter Fonda, Johnny Cash as well as his close encounter with ultra-terrestrials on the way to Las Vegas and his subsequent dealings with the dreaded Men in Black and some strange critters that resembled Bigfoot.
The weirdness shines bright in this episode. Free newsletter from mrufo8@hotmail.com
Posted by Unknown at 3:55 PM No comments:

Looking At UFOs From A Cracked Mirror 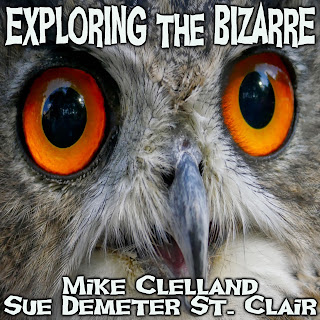 Examining alternative viewpoints on UFOs and related phenomena with SUSAN DEMETER-ST.CLAIR AND MIKE CLELLAND. So much time, research and dedication has been poured into the UFO mystery over the past 70 years. Top Secret documents have been filed, books have been written and movies produced. However, are we now any closer to solving the mystery than we were when Kenneth Arnold had his first strange sighting over the Cascade Mountains in 1947? Timothy Green Beckley and Tim R. Swartz discusses with guests Susan Demeter-St. Clair and Mike Clelland the stranger aspects of the UFO phenomena such as the mysterious connection between owls, synchronicity and UFO abduction. As well, Susan points out that the high-strangness aspects of UFO (and other) encounters could be a path to understanding the human experience that goes beyond normal perceptions. Susan also talks about her experiences as a child with little figures that resembled elves, and her later perceptions of a wolf entity that may have been an offshoot of her own consciousness. Perhaps we have not been able to find the answers about UFOs because we haven't been asking the right questions. In fact, our brains may be unable to even conceive of the questions that are needed to understand the UFO mystery. We view our world, our reality, as a mirror image of ourselves...and why not? We have no other references other than our own experience. Yet we expect to find answers to something that may be far beyond human conception. We are looking at UFOs from the cracked mirror of human experience and conditioning, growing frustrated when no answers are forthcoming, yet continuously tantalized by the brass ring that seems to be forever just out of reach.
Posted by Unknown at 1:41 AM No comments:

You Can't Ignore UFOs...But Many Do 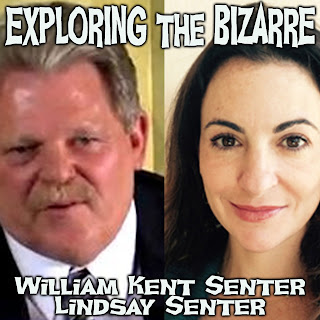 Father and daughter WILLIAM KENT SENTER and LINDSAY SENTER share their interest in UFOs with Timothy Green Beckley and Tim R. Swartz on Exploring the Bizarre!
It can be a frustrating endeavour for those who have spent years investigating UFOs. The subject is often met with bad jokes about drinking and drugs, accompanied by the rolling of eyes and sigh's of boredom. By the 21st century, UFOs had become such a pop culture trope that the mainstream press has taken the attitude that UFOs are strictly for the tabloids.

Kent Senter, who along with George Fawcett, started the North Carolina state chapter for MUFON, says that anyone who attempts a serious study of UFOs faces severe questions concerning not only their credibility, but also sanity. Kent started The Center for UFO Research N.C. in 2013 and is no stranger to just how weird UFO research can be. One time, after investigating a cattle mutilation case, he came face to face with three bizarre characters who looked and acted just like the traditional Men-In-Black (MIB)!
Lindsay Senter says that due to her father's interests while she was growing up, she is very familiar with the paranormal. From ghosts and spirits to aliens and UFOs, the paranormal is something that is quite normal to her. Lindsay has a very rewarding career, one that involves the paranormal, as she owns a paranormal talent and event management company, Senter Stage Events. Her company manages some of the best and well known talent in the field when it comes to all things Weird, Paranormal, and Magical.
Posted by Unknown at 1:38 AM No comments: